1st March 2017 marks the day that my bestest old lovely friend Jayne and I have been waiting nearly 3 months for. We’re off to Goa, India. Actually, we’ve been waiting for 27 years for this holiday.

Jayne and I met when we were both 19 years old, 28 years ago now! We were teen mums to our son and daughter who used to play together and now, all these years later, between us both, we have 12 children and 4 grandchildren, no less!

Way back then, we always said we would go on holiday to India together one day. In December 2016, we booked our flights!

We had originally planned to go to India for a month, two weeks in the North and two weeks relaxing in Goa but for various reasons, a month away from home at this time just wasn’t going to be practical for us, so we decided in the end to just stick to the latter part of our trip.

Having travelled to Goa many times when my children were growing up and knowing the place of old,  I was more than happy to arrange a loose itinerary for us to follow and I was super excited to introduce Jayne to my lovely Goan ‘family’ whom I’ve known for 12 years and who’s newly built guest house we would be staying at.

Jayne and her partner David arrived at my house at about 8.30am. We did some last bits of packing and then left for Heathrow at about 9.30 and we arrived there at 10.30. Jayne and David had a lovely, affectionate farewell and then Jayne and I went on our way.

We had 3 hours before our flight so we drank coffee at extortionate prices and talked about……….yup, you’ve guessed it….the kids hahaha! What else? It’s all we know.

We boarded the plane and our seat row number was the first to be called out. We made our way down the plane, passed all the rows of seats only to find that our seats were right at the back of the plane. We loved it! We could lean back without fear of disturbing anyone behind us and Jayne had loads of space to her left, underneath the window, for our bags. This was the first of many examples of how we were being held by the angels, God, The Universe, or whatever name you wish to give to the wonderful spiritual force which cradles us, which is always there holding us, keeping us safe and loved unconditionally. 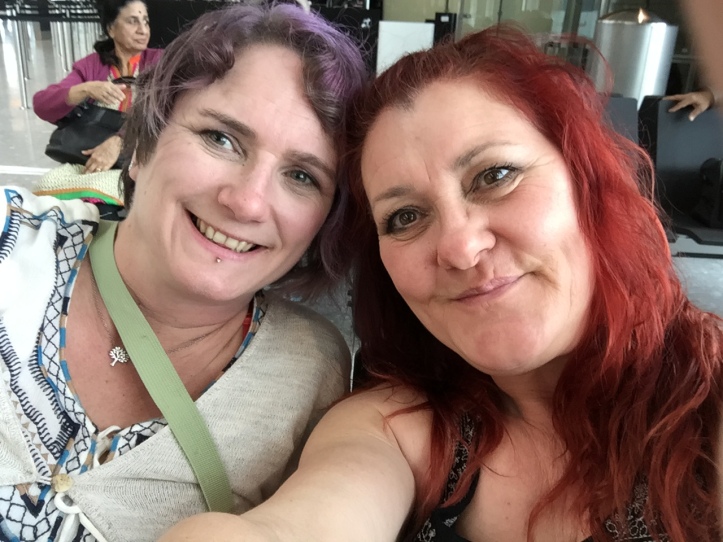 .Jayne and I were flying with Air India. I always book through the website Tickets to India as they always seem to provide the best price and I’ve always found Air India to be great. Clean planes and efficient service from friendly cabin crew.  Our first stop was Mumbai and then on to Goa.

The flight was pleasant although the only hiccup was the flight path video wasn’t working which was a bit of a bummer as I like to track the journey ( to India, never the return journey ). We ate a perfectly acceptable meal; I had veg, Jayne non veg and for the rest of the 8.5 hour flight we talked, snoozed, talked, watched movies, talked, and played online games. Jayne and I were actually talking. Alone. To each other. Uninterrupted by children.

The transition at Mumbai airport was smooth but we had a couple of hours stopover and during this time I discovered something about Jayne that I hadn’t known before and that is that the woman is bloody hilarious. She’s SO damn funny and comes out with these one liners that had me doubled over. I think the reason I hadn’t realised how funny Jayne was before and the only explanation I can think of for that was we’d been too busy raising kids!

We arrived In Goa and at Monica’s ( my mum) very tired but very happy. After some quick introductions, it was time to get our heads down. Jayne slept for hours but I woke up after only two hours and ate a huge plateful of Monica’s amazing fish curry. I could barely walk out of her kitchen I was so full! I strolled down the lane to say hello to Fatima and her family and to meet with the beautiful Zeenat ( Fatima’s daughter) who was only 6 months old last time I was here five years ago. No sooner had I sat down was I offered more food. It would’ve been rude to refuse so I ploughed through yet another enormous meal.

Following that, I jumped onto my old trusty scooter, a bright yellow Dio, and went shopping for supplies such as washing powder, a plug adapter and an enormous container of water with a stand so as we could refill a bottle or two to keep in the fridge to take out with us. Actually, I say ‘my’ scooter. It used to be. I bought it many years ago, brand new but when finances were low and I needed to buy my ticket back to the UK one year, I sold it to Monica’s son and now his wife drives it. Oh, how I love driving a scooter around Goa.

Jayne woke up, proper introductions were made and she met the family. We then went for a meal on Benaulim Beach and I was literally bombarded with many, many hellos from people I’ve known for 12 years, people who watched my kids grow up here but whom I haven’t seen for 5 years.

Following another amazing meal at Rogers beach shack, went to bed that night exhausted, full up with delicious food and deliriously happy.

It so damn good to be back.